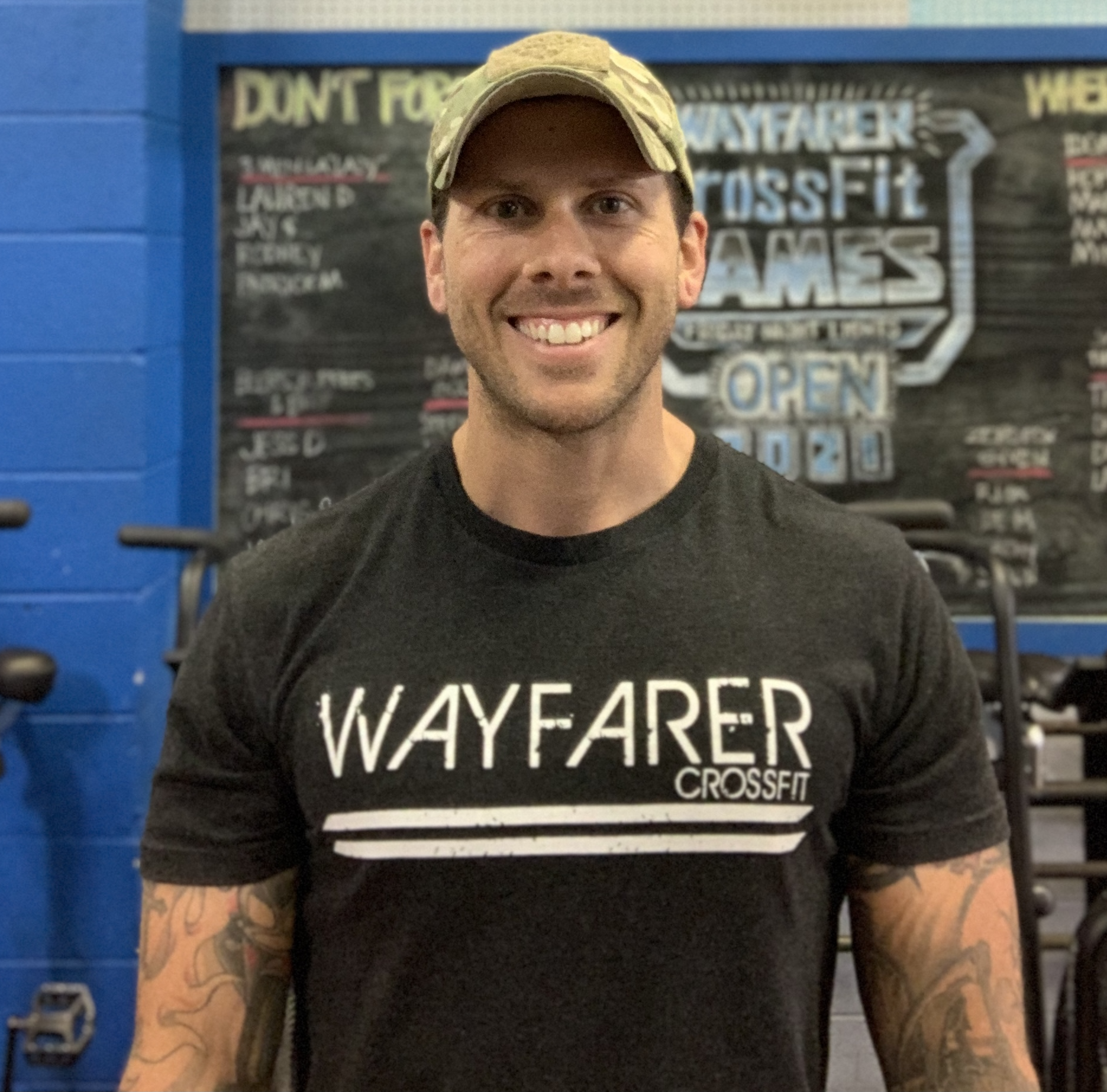 Nate Kozma is a Level 3 CrossFit Trainer and USAW (USA Weightlifting) Level 1 Sports Performance Coach. Nate has worked extensively with all types of individuals throughout the years. His easygoing demeanor and keen attention to detail allows him to work well with any individual no matter their fitness level. Ultimately, his goal as an owner/coach is to create a fun, comfortable environment where every member has the opportunity to reach his or her full potential.

Nate decided to open Wayfarer CrossFit in July 2014 after working full-time as a coach for two years at CrossFit South Hills. In addition to his CrossFit and weightlifting certifications, Nate has acquired knowledge and experience through training courses focusing on CrossFit Gymnastics, CrossFit Anatomy, CrossFit Movement and Mobility, CrossFit Adaptive Training, and CrossFit Scaling.

Before indoctrinating himself into the CrossFit world, Nate served in the United States Army from 2001-2006 attaining the rank of Sergeant/E-5. He served as an Airborne Field Artillery Firefinder Radar Operator for five years while spending a one-year tour in Iraq (2003) as well as a one-year tour in Afghanistan (2005). Following his military career, Nate studied at the Motorcycle Mechanics Institute in Phoenix, AZ from 2006-2008. Shortly after his time in Arizona, Nate moved to Louisiana where he worked on oil rigs in the Gulf of Mexico from 2008-2010.

Nate began to face personal struggles with alcohol abuse as he returned to civilian life post military. An abnormal EKG reading provided to be a wake-up call prompting him to immediately quit drinking and smoking in an effort to refocus his mind and body through health and fitness. It was at this time that Nate had his first CrossFit experience. In his first class at CrossFit Lafayette (Louisiana), Nate came face-to-face with the popular benchmark workout, “Fran,” and has been hooked ever since.

Outside of the gym, Nate enjoys spending quality time with his wife and fellow Wayfarer CrossFit member, Lara and their kids, Grayson and Frankie. His hobbies include hunting and fishing, camping and hanging out with friends. 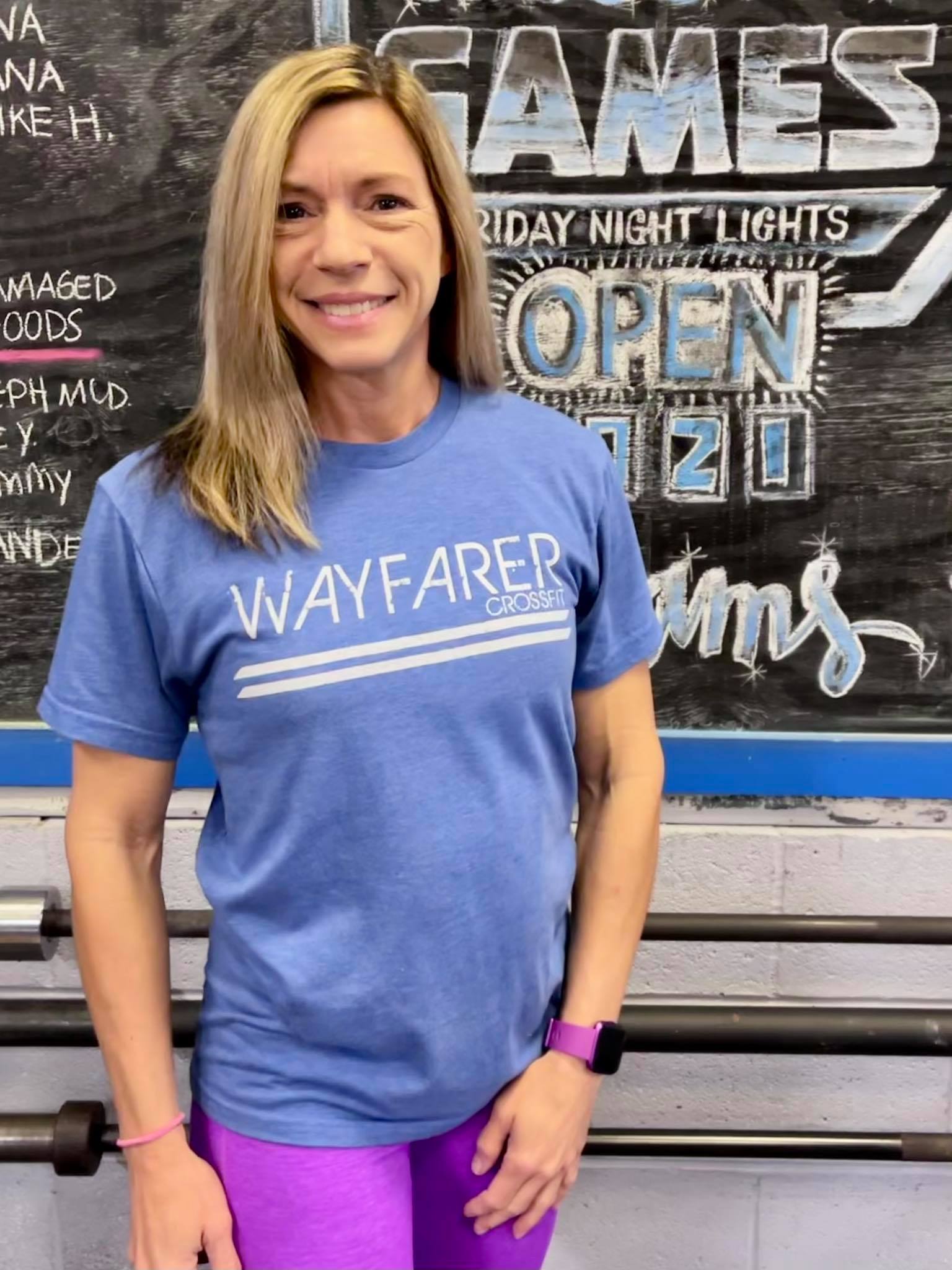 Heather's fitness journey began with her aerobics instructor approaching her and asking if she had any interest in being an instructor. Shortly after that, she received her AFAA certification and began teaching. She cycled through many regimens, but was still looking for something a little bit more. She tried CrossFit after a fellow member encouraged her to. She knew this was what she wanted to do.

She enjoys the variety - the lifting, cardio and gymnastics - that CrossFit provides, and of course she loves the people.

After a year of participating in CrossFit, she received her CrossFit Level 1 Certification and began coaching. Heather thinks it is a great honor to coach all of the amazing members at Wayfarer.

In her free time, Heather likes to spend time with her husband and two children, being out and about in the mountains. She is also a self taught metalsmith and makes jewelry. She also enjoys cuddling with her dogs, Delilah and River. 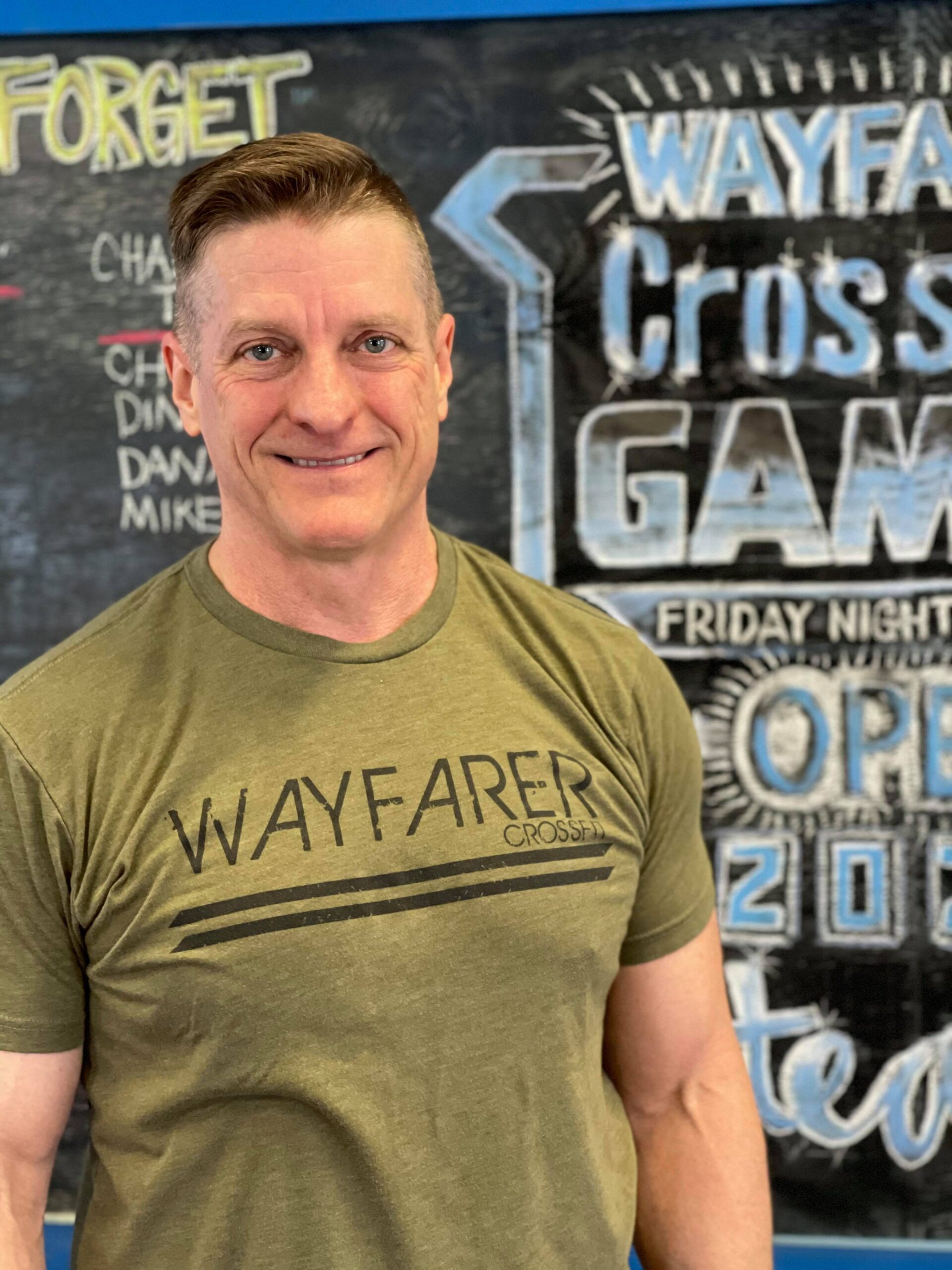 Dave's CrossFit journey began in 2016. He was in the middle of a divorce and raising his 2 kids. At the age of 50, he was 60 lbs. overweight, pre-diabetic and pre-hypertensive. His doctor told hm he had to do something about his weight or he was going to have to go on medication.

His son Greg got involved at Wayfarer CrossFit through a high school program that Nate was running. Greg told Dave they were doing the 16.1 Open workout and asked him if he  wanted to go watch. He had no idea what CrossFit or 16.1 was, but he agreed to check it out anyways. When he walked into that gym he saw what he thought were 2 brothers doing lunges across the room with what looked like a 300 lb. barbell overhead. They looked straight out of the movie “300”, six-packs galore.  He learned after the workout they weren’t brothers, they were a father and son (and the father is older than Dave). He canceled his Planet Fitness membership immediately and signed up for on-ramp and never looked back.

Dave loves everything about CrossFit, including the camaraderie, the variety of the workouts and how challenging they are. He feels like he found another family that celebrates each other’s successes and he never felt like he was being judged. Most of all, Dave loved the opportunity to work out with his son and was even able to get his daughter involved before they both went off to college.

After 4 years of CrossFit Dave decided to get his L1. He loves that he can be a part of someone else’s success. He gets so excited to see someone get their first pull-up or double under.

Outside of the gym, Dave enjoys hanging out at parks with his girlfriend and his 2 sweet golden retrievers. He also enjoy playing guitar and going out to see live music. 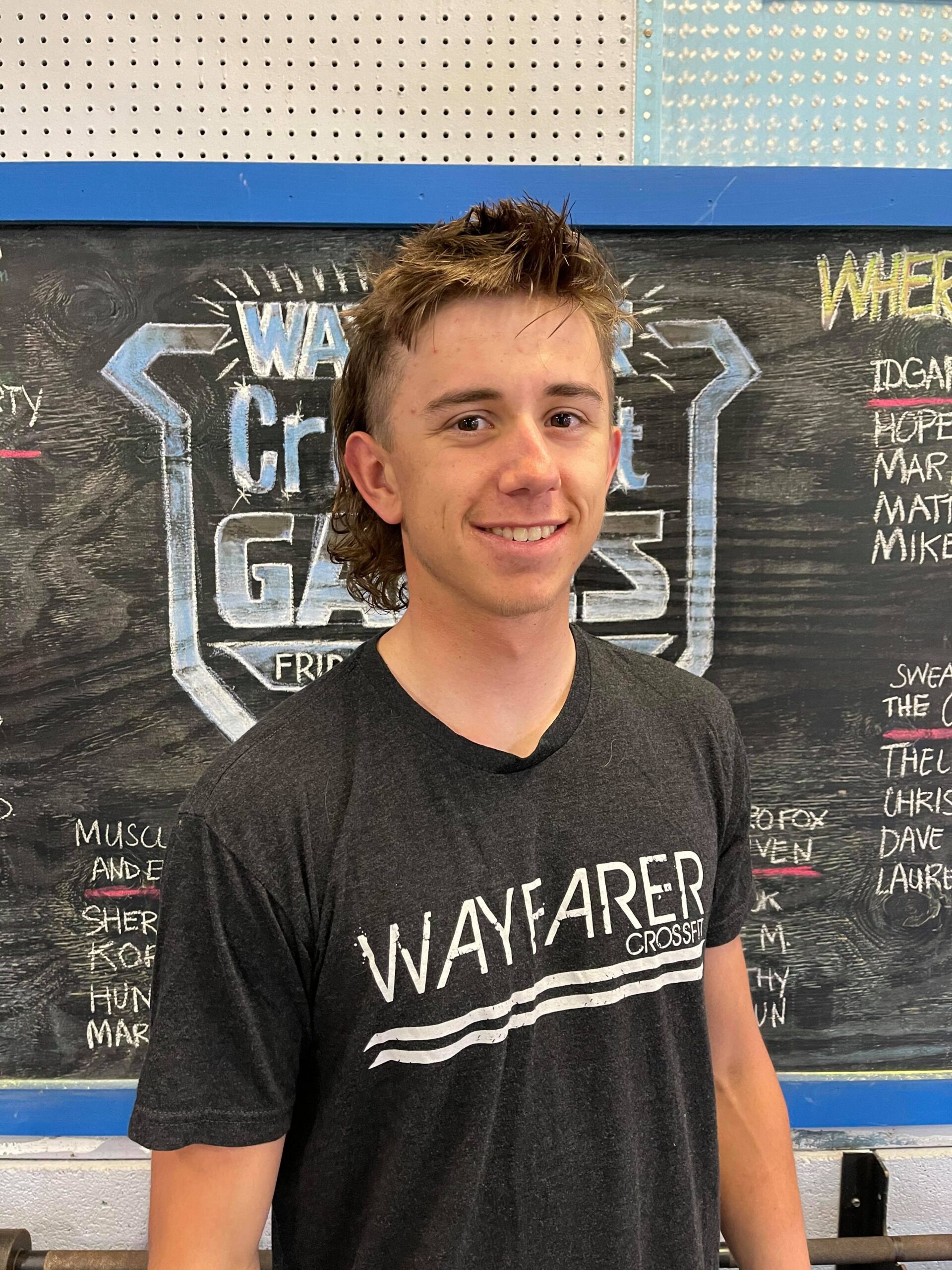 Brent first got into CrossFit because he saw the CrossFit Games on TV when was 14 years old. He realized there was a CrossFit gym a mile away from his house and decided to give it a shot. He came the first day and ended up falling in love with it. Every day he enjoyed it more and more.

A month after he turned 17, he got his Level 1 certification so he could start coaching. Brent really enjoys coaching because he loves to help out other people. Brent’s main reason for coaching is that he wanted to help the members at the gym not only be able to get fitter, but live a healthy lifestyle. He loves everyone at the gym and “being able to coach them makes it that much better.”

The gym is his favorite place to be and he is extremely proud to be a part of such a great environment. Brent’s favorite parts about the gym is being able to make friends with such great people and obviously being able to get the best workouts. Brent really enjoys being able to share his passion with his sister, Briauna, who also loves the gym just as much as he does. Any chance that he gets, he always tries to workout with or coach his sister since they have such a tight bond.

Outside of the gym, Brent attends Mount Aloysius College in Cresson, PA where he plays baseball and majors in Cybersecurity and Digital Forensics. He loves dogs; he and his family are proud owners of 5 dogs! 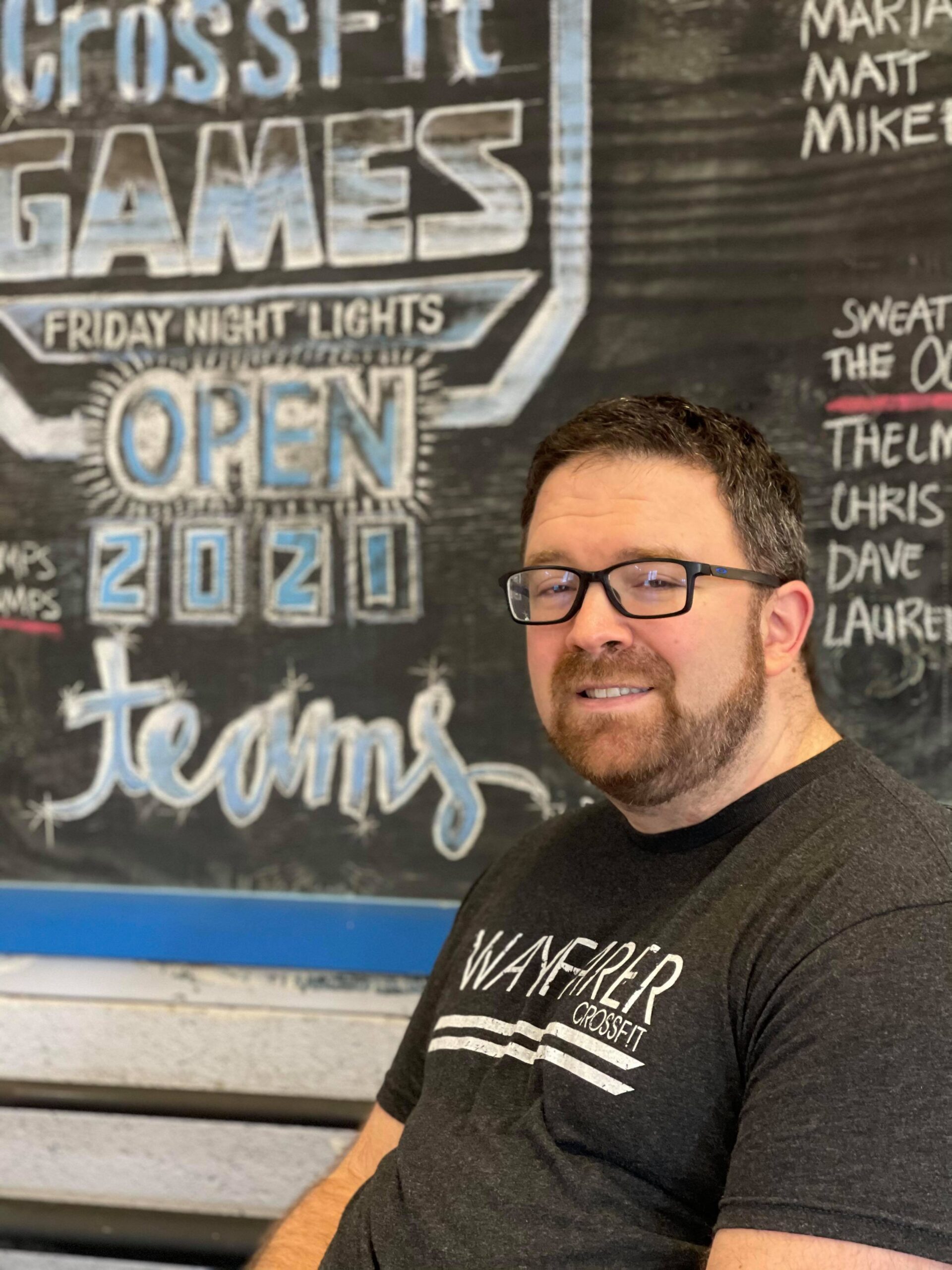 Rick joined Wayfarer CrossFit in 2017 after finally hitting the point of wanting to get his health under control and not wanting to be overweight (at roughly 260lbs).  He was tired of attempting to make up his own workouts and was not motivated going to a typical gym.
In 2008, Rick suffered a spinal cord injury diving into a swimming pool, breaking the 7th vertebrae in his neck causing paralysis from the chest down. This injury made working out and going to a gym even more of a hurdle but he knew he needed to make the change. Fortunately, Rick contacted Nate, on a suggestion from a friend, and Nate said he was willing to work with Rick to figure out how to adapt the movements for his condition. Rick fell in love with the community and the structure of the workouts; everyone was supportive and encouraging which is not what you typically encounter at a large fitness center. Shortly after starting, he was introduced to adaptive CrossFit competitions and have continued doing them ever since.
After being a member for 3 years at Wayfarer CrossFit, Rick decided to get his L1 training certificate so that he could coach classes and encourage others. He also have an adaptive CrossFit training certification and try to bring awareness to others with similar conditions about CrossFit.
In his free time he enjoy spending time with his family and friends, learning how to bake, cooking, watching movies, playing video games, building Legos, and working as a mechanical engineer. 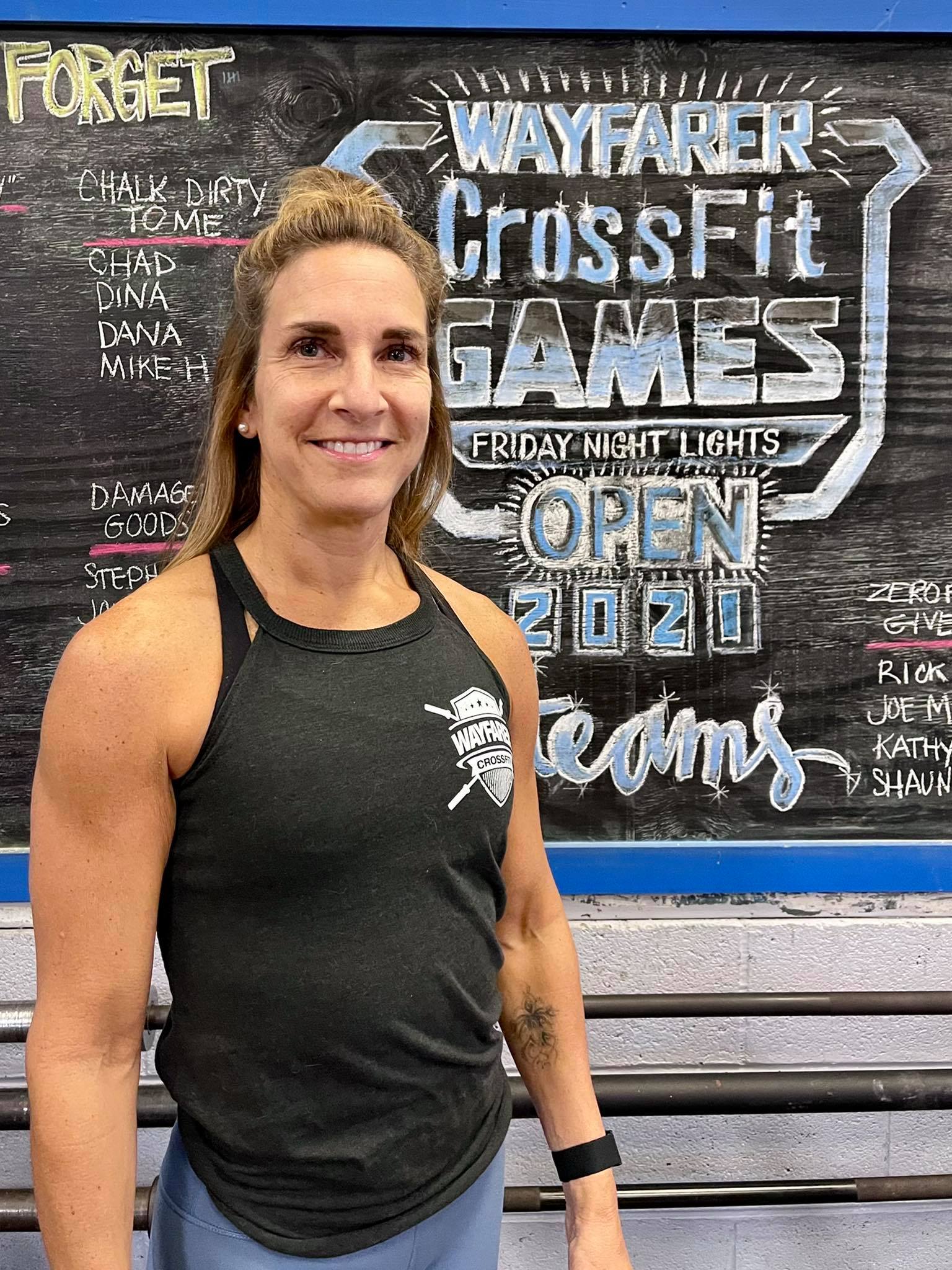 Margie has been exercising her whole life with the most emphasis on weightlifting. Margie also has a background in gymnastics and has always enjoyed workouts that incorporate gymnastics movements.

She started CrossFit in 2015, at the age of 48, after a close friend introduced her to it. Margie feels you are never too old to start something new and improve your fitness! She  quickly developed a passion for it and learned how to push herself. She loves that the methodology of CrossFit encompasses so many areas of fitness and that every day in the gym is challenging and different. She also loves the community! After 5 years participating in classes, she decided to get her Level 1 in order to support others in their personal fitness journeys.

Outside of the gym, Margie is a Physical Therapist and has worked in a variety of settings with adults and children with disabilities. She currently specializes in Early Intervention with infants and toddlers. She has a Master’s degree in Health Education, as well. She feels fortunate to have had the opportunity to  empower parents and caregivers to help their children reach their full potential. As a coach, she looks forward to being able to help members to achieve their goals and be the healthiest and best versions of themselves.

In her free time she enjoys spending time with her family, traveling, drinking wine and binge watching Netflix.

Favorite movement: Handstand push-ups, handstand walks and anything she can do hanging from the bar! 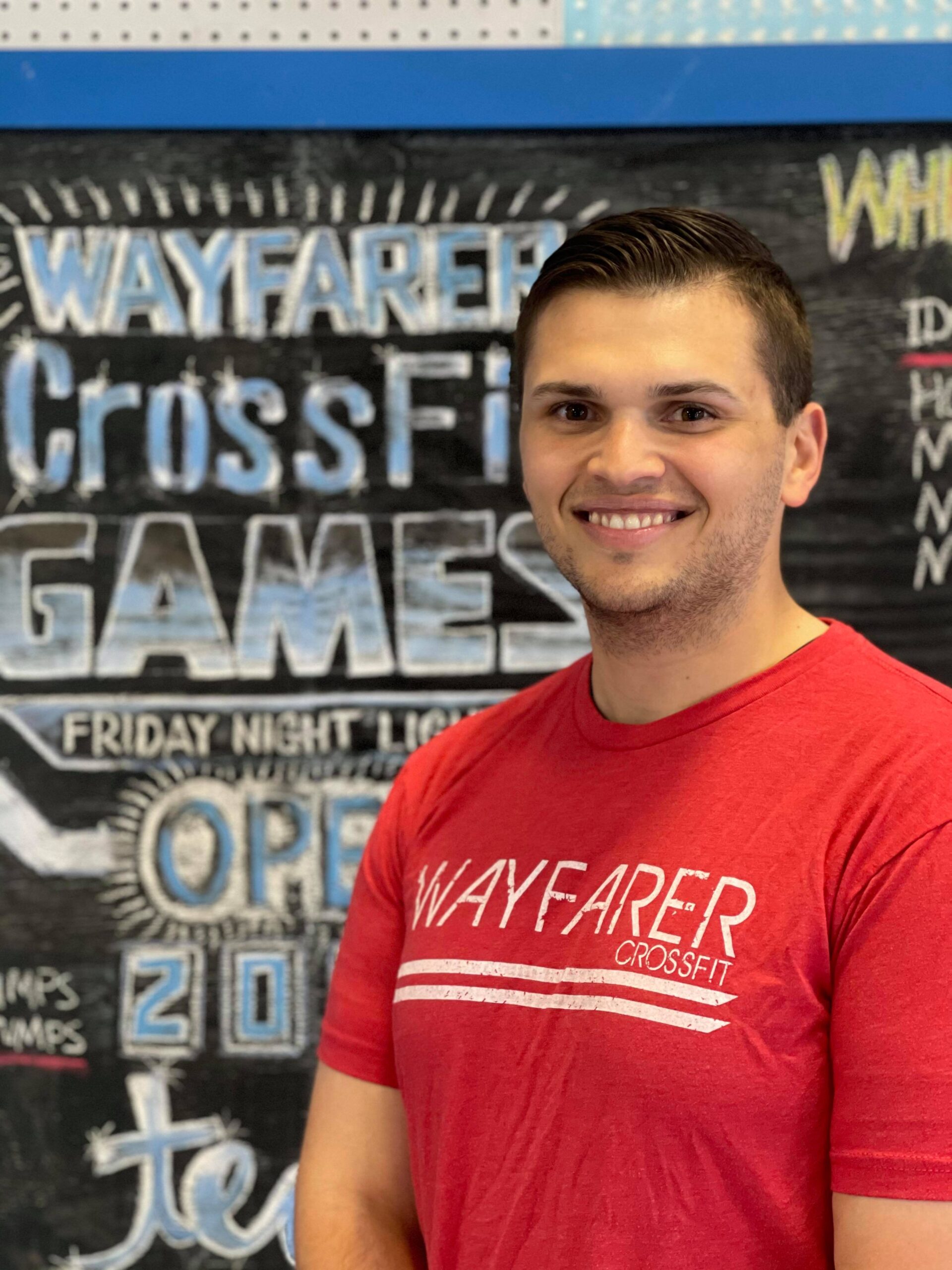 Dylan’s introduction to the world of fitness began in 2005, as a high school athlete, finding a love for weightlifting as he participated in offseason football workouts for the first time. Dylan’s passion for weightlifting followed him to the collegiate level as he continued his football career playing for Saint Vincent College. Through his positive experiences in a collegiate strength and conditioning program, Dylan decided that he wanted to continue to tie the world of fitness and athletics together after college.

Having a very competitive personality, Dylan began looking for ways to remain competitive, while also helping others achieve their fitness and athletic goals. After belonging  to several gyms, Dylan discovered CrossFit in 2016 and decided to give it a try as a way to satisfy his competitive spirit and immediately fell in love with the community, challenging workouts, and like-minded people all looking to advance their health and well-being. After having a great experience in the Wayfarer community, Dylan decided that he wanted to be more involved and give back however he could. Dylan received his CrossFit L-1 in January 2021 and began giving back the same positive experiences that he was welcomed with when he joined Wayfarer in 2020.

Outside of CrossFit, Dylan is an 8th grade U.S. History Teacher, high school varsity assistant football coach, and the head football strength and conditioning coach at Norwin School District, where he has shared his love and knowledge of functional fitness with hundreds of student athletes.

In his spare time, Dylan enjoys skiing, golfing, hiking, and attending as many concerts as possible.

Favorite movement: Power Cleans and any variation of Squats 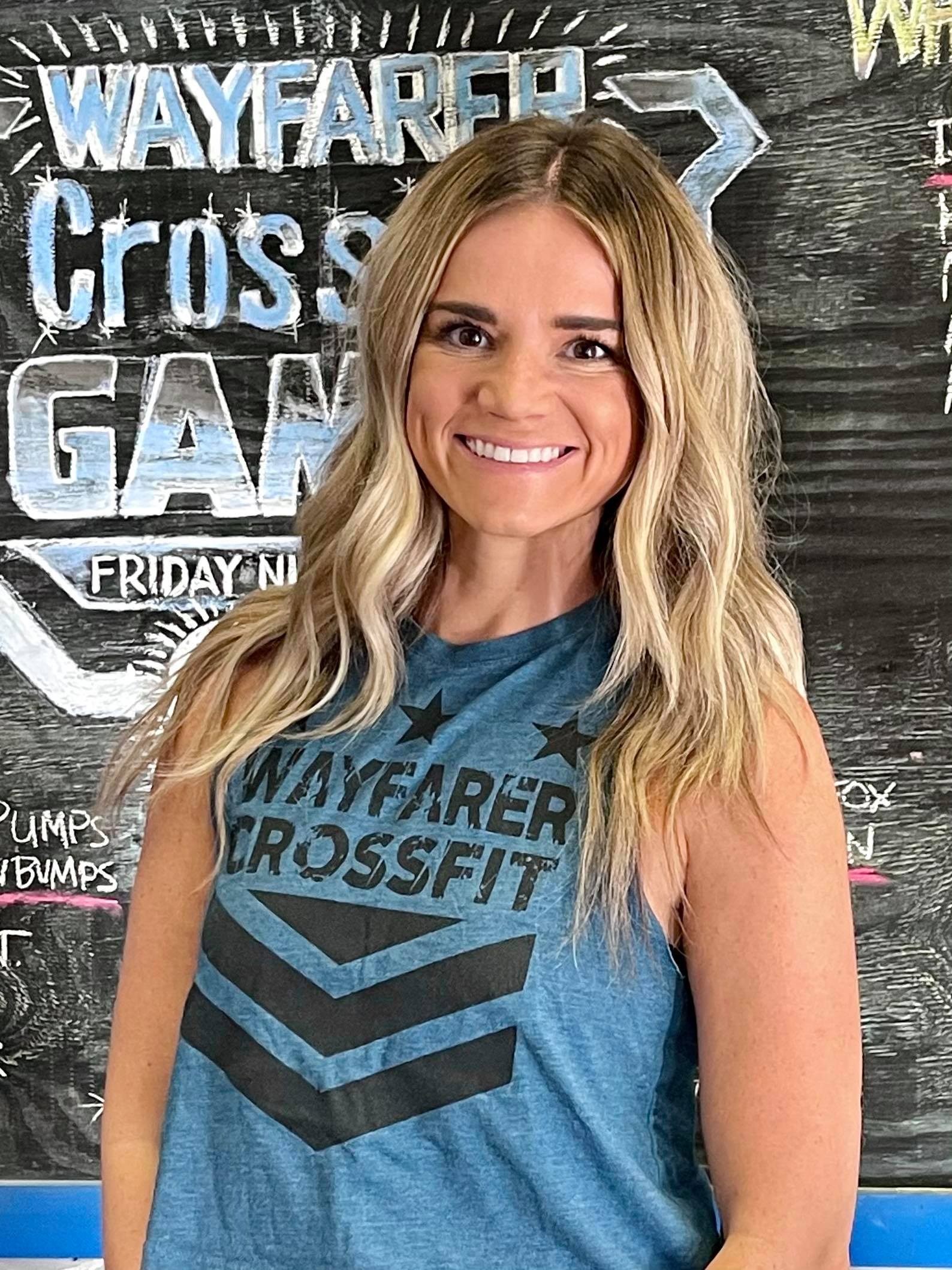 Lauren handles the social media/merchandise design and sales/marketing for Wayfarer CrossFit. She is always around being a photo ninja, looking for member's accomplishments and making sure everyone is in the know. She also runs our members only Facebook Nutrition page and likes trying new healthy recipes (and taking photos of them).

Lauren's main goal is to keep everyone involved and to feel included at WFCF. She is a Wayfarer OG and has been a member since September 2014. She loves meeting new members and making everyone feel welcome.

In her free time she enjoys spending time with her family, including 4 dogs, reading books about murder, cooking, gardening and working at her other job as a Senior Portfolio Manager for a technology company.